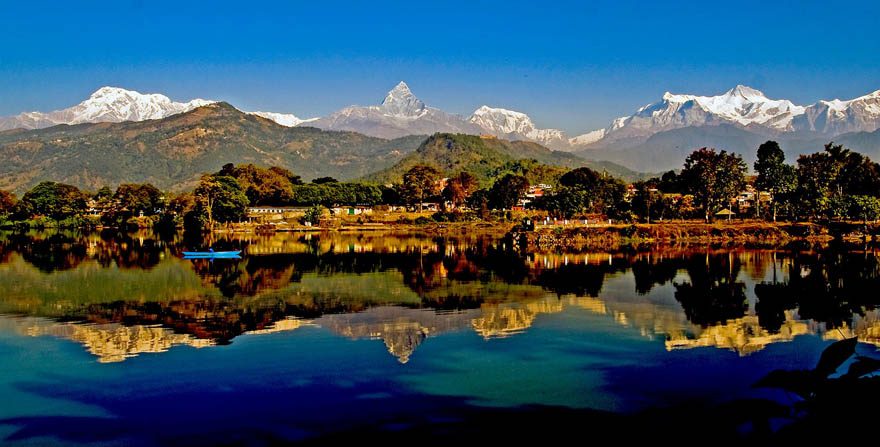 Nepal has been the dreamland of the tourists for a long time. Nepal invites, welcomes, charms and bewilders the visitors. The pattern of religion gives the country a unique status in the world. Almost all the important religious sects of the world are found in Nepal.  However the majority of the population believes in Hinduism. The conglomeration of the two religious, Hinduism and Buddhism serve as a unique example of tolerance and brotherhood. Pokhara city tour is among one of the must visit places during our lifetime.

Pokhara valley (850m.) lies in 200 Km west of Kathmandu valley. The valley is the most popular destination in Nepal after Kathmandu. It is the second biggest city of Nepal where around 134000 inhabitants live. It is the only valley in the world from where one can see snow capped mountains higher than 8000 m. From below 1000 m. These mountains lie in about 25 to 35 km. Arial distance. This valley is the most famous trekking gateway for world famous trekking areas. This includes Fishtail, Annapurna and Dhaulagiri area. More than 65% of the total trekkers of Nepal trek in Annapurna region. It is only 35 minutes flight and 6 hours drive from the capital city Kathmandu.

There are around 25 flights and several deluxe tourist bus services daily. There are hundreds of tourist standard hotels including non star to five star levels. Pokhara city tour of 6-8 hours starts at around 8 a.m. in the morning after your breakfast. Your guide will pick you up at the hotel and escort you to the sightseeing places in Pokhara. We will visit Fewa Lake, David’s falls, Gupteshwor temple and International Mountaineering museum respectively.

Fewa Lake is the destination you must not miss while you are in Pokhara. Adorned with colorful boats, coffee shops and shops stalled with books and accessories. Fewa lake is an attractive and pleasing place to spend your time in. The beautiful views of Annapurna massif on a clear day is amazing. The glimpse of Mt. Fishtail in the undisturbed water of the lake makes the lakeside truly fascinating. You can enjoy boating on the Fewa Lake. Then visit a temple placed in between the lake known as Barahi temple.

Moving ahead, we visit a popular waterfall that lies approximately 2 kilometres south west of Pokhara. In past, a foreigner named David accidently fell into an underground passage beneath the while he was enjoying swimming in Phardi Khola. Since then the waterfall is named as David’s fall. The waterfall looks stunning and is a center of attraction to many tourists visiting Pokhara.

Our next destination is a mysterious cave that lies near the stunning David’s fall. The cave is mysterious in sense it preserves a phallic form of Lord Shiva called Shivalinga. It holds a high value amongst the Hindu pilgrims. As the Shivalinga li in the cave, it is popularly known as Gupteshwor temple and the cave is known as Gupteshwor Gupha. Many Hindu pilgrims around the world visit this place with high importance.

International Mountaineering Museum is an alluring museum placed in a gateway to the trekking trail. It leads us to the Annapurna region of Nepal. It also keeps record of all the major human activities inside the Annapurna region. This maintains a record of unique flora and fauna seen inside Annapurna Conservation. The roof of the museum resembles with the peak of the mountains.

After visiting the international mountaineering museum, we conclude our Pokhara City Tours.Therefore  we will drop you back to the hotel. Al last hope you had a good time with us.

Not what you're looking for? Create your own trip. Customize trip

I first used Bharal Adventures three years ago when Arjun was my guide for my Everest Base camp trek. Arjun was very genuine, friendly and knowledgeable about the area and I felt very relaxed and in good hands. I adored the holiday and the beauty of the Himalayas so decided to return to Nepal again. This time to trek in the Annapurna region. I of course chose Bharal Adventures to be our tour guide company again. This again has been a fantastic experience.

The weather was unusually heavily snowy at times and meant that we had to turn around and change our plans slightly, which Arjun coped with very well. He was very flexible and accommodating and always tried his best to make us feel comfortable and enjoy our
trip to the fullest. I would recommend this company and this guide to anyone. He loves his country, its mountains and his job and it shows. A thoroughly great holiday, thank you Arjun and Bharal Adventures!

Nothing prepares you for the Himalayas. Waking up every day to 5-mile high mountains is one of the most humbling and incredible experiences of my life. As a frequent traveller, this was my first time to Nepal, so I wanted to be sure my experience was going to match my expectations. On arrival, Arjun from Bharal was there to greet my partner and I with a smile - which he kept all week. Even when we were snowed in along the pass; walking slowly up the mountains and laying in a little too long - Arjun always made sure our needs were prioritized.

If you want a tour which is:

- At your own pace

- Going to *the best places in Nepal

- One you will remember forever

I thoroughly recommend Arjun and Bharal. I came to Nepal as a tourist, to meet a guide and a porter. I left with 2 friends, incredible photos, lifelong memories and a promise we will return one day, with my daughter to tackle the incredible Manasalu!

Last November I traveled to Nepal to visit the remote area of Kanchenjunga. I'm from Spain and did the Kanchenjunga circuit (North and South base camps) with my Indian friend. After many mails sent to several trekking companies based in Kathmandu we only received overpriced offers, until we finally met Arjun, the manager of Bharal Adventures, and our expectations changed immediately. He provided us with reliable information, answered all our mails quickly and carefully and made an itinerary to suit us at a very reasonable cost, exactly what we were looking for since a long time. Once in Kathmandu, his partner Bijay came to the hotel to introduce himself and give me some instructions before the trek and all the assistance I needed. The day before the departure, Arjun and Bijay invited us to have dinner at their home to offer us a warm welcome, they were really friendly. As per the trek itself, our guide had good experience in the Kanchenjunga region and managed all the situations in a solvent way. Besides, we were very lucky with the weather and could enjoy the trek with its stunning views. It was really a fantastic experience. Once the trek finished, Bijay and Arjun came to my hotel to be sure we received a good service during the trek and say goodbye. I can only recommend this trekking company to all the people traveling to Nepal. You will not be disappointed.

Our journey started in 3 different cities in Malaysia, 6 travellers in all - Myself and my good friend Ray started out from Johor Bahru, Suk(the only female in our group) & Ricgen's journey started from Mallaca, the 4 of us met with See and Su in their home town of Kuala Lumpur, (KL) Malaysia.

6 of us met in KL and departed from KL international airport for Kathmandu Nepal. where Arjun Dhakal met us at the airport and we transferred to our hotel and finalised all details for the EBC trek.
The next day we flew out to Lukla and this is where the real adventure began.
The actual trip is a story for another time all I will say is that this adventure was absolutely amazing in fact so amazing that I'm contemplating doing ABC with Arjun next year sometime.
Arjun and his team were very professional, his personable character allows for a very relaxed but very organised approach to everything during our trip.
The EBC adventure was one of the most amazing adventures I have ever experienced I would add that this trip rates equal to The Kokoda trek I completed in Papua Nuigini.
I want to express my gratitude to Arjun Dhakal and his team at Bharal adventures you were amazing and I would recommend this team to anyone interested in doing EBC

We were two persons intending to trek in the remote and restricted Kanchenjunga region. I am an Indian and was with a Spanish friend. After not getting positive responses from various organizations or getting quoted very high prices, we landed on Bharal Adventure. And it was a great experience right from the beginning. The extremely polite Arjun answered all of our queries patiently, tailored the itinerary according to our requirements and finally helped us with a knowledgeable guide for this 22 day trek. And when everything was done at a reasonable cost, we couldn't ask for more. The superb weather and views during the trek added to everything and the overall experience was fantastic. Highly recommended for all your adventures in Nepal !

Going to the Everest Base Camp was once an impossible dream to achieve.
With Bharal Edventure, the impossible dream comes to a reality. Mr Suraj, our guides, Ganesh and friends who made it possible for me to reach the EBC. I would not be able to go through the tough journey with extreme environments without their help and encouragement.

Thank you very much for the hospitality given by Bharal Adventure especially Mr Suraj and Mr Arjun. Thank you so much for making this once impossible dream become possible. This is truly the most valuable experience I ever have.

Lead by arjun and 7 porters to bring 14 of us to amazing journey to annapurna base camp. Very friendly and helpful. Received first class services from them and the porters also friendly and hardworking.Sure to look back for them for the next trip to nepal.

I went to Nepal on a 9-day trek in the Langtang region a couple years ago. I was traveling on my own so I really appreciated to be with a trustworthy and friendly guide Sujan. I would definitely recommend his agency and would like to go back myself!

Before booking a trip 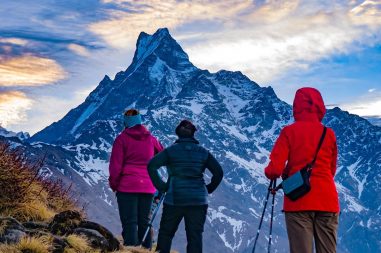 Mardi trek is considered as gem as it’s view is amazingly mesmerizing, it lies in the Annapurna region. This wonderland is filled 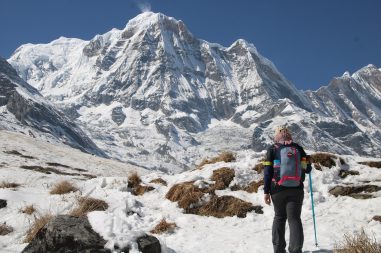 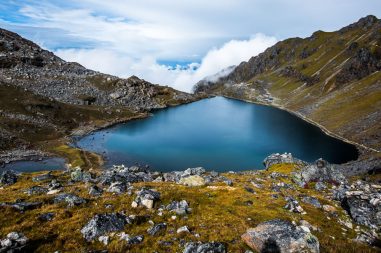