Can we travel Nepal during Monsoon?

Bharal Adventure > About Us > Our Team > Blog > Blog > Can we travel Nepal during Monsoon?

Monsoon is one of the best time to trek in Nepal which many people are not sure about.Not only in Nepal everywhere around the world wherever you may be travelling we think twice before starting our journey anywhere during monsoon but we will definitely miss the real taste of nature if we don’t travel during the monsoons.For many people travelling in monsoon may not be safe as there are frequent happenings of natural disasters like landslides, floods,soil erosion and many others.The greenery in the environment,the city with less dust ,the farmers giving their heart and soul working in the field,aren’t they good to look at?Aren’t they beautiful enough to lost in the nature ?This blog particularly talks about the trekkings that can be done during monsoon in Nepal ,the benefits that you can grab during your monsoon trek in Nepal and many more hope this will help you a lot.

The monsoon in Nepal starts on June and ends on August.So the 3 months namely June, July & august are considered as the rainy seasons in Nepal.The monsoon in Nepal are not so heavy on the upper part of Mustang and The everest regions but they are quite heavy and more frequent around the annapurna region the way to annapurna base camps where it may even have the chances of landslides and soil erosion.There are high number of leeches that sucks your bloods in annapurna region as well.

Trekkings that can be done during Monsoon in Nepal:

Trekking to Upper Mustang in Nepal gives you one of the different feelings apart from  your regular travel and trek activities.The mustang region of Nepal is often called as the forbidden part of Nepal where some few years ago they even used to have their own kings even it is the part of Nepal.It lies on the chinese border side at its ending point.The buddhist activities are more popular in this region.The tiji festival that is celebrated here is one of the major attractions for the visitiors.It is better  to travel Mustang during Monsoons because you can explore the village along with all the villagers in their local homes who are busy in farming.The other advantage is there it rains hardly as Manang and Mustang are the driest valleys of Nepal. 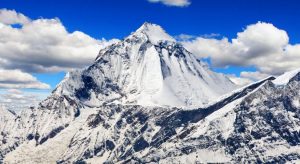 The beautiful Dhaulagiri a 8,167 m mountains that can be seen during upper mustang trek.

The dream destination of many yet achieved by some is everest base camp.Everyone wishes to be in the lap of everest being in the everest base camp but not everybody who wishes have done it.There may be many reasons behind this one of them is over crowd at this place during summers and springs .There are some people who don’t really enjoy crowds and noises and there are some other peoples who worries about the availability of tea houses and rooms over there where they can have a good nap after a tiresome day.Definitely during peak seasons until and unless you don’t book for the teahouses in advances sometimes you may be even compelled to sleep in the dinings in some exceptional cases.So monsoon can be the best choice for you as you don’t have to worry about being in crowds and you don’t have to really worry about the availability of teahouses.It doesn’t get so much of rain even during monsoons in Everest Regions so it is more suitable. 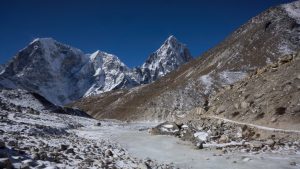 For more information regarding everest base camp trek visit our official site through this link https://bharaladventure.com/packages/everest-base-camp-trek/

Benefits of trekking in Monsoon in Nepal: